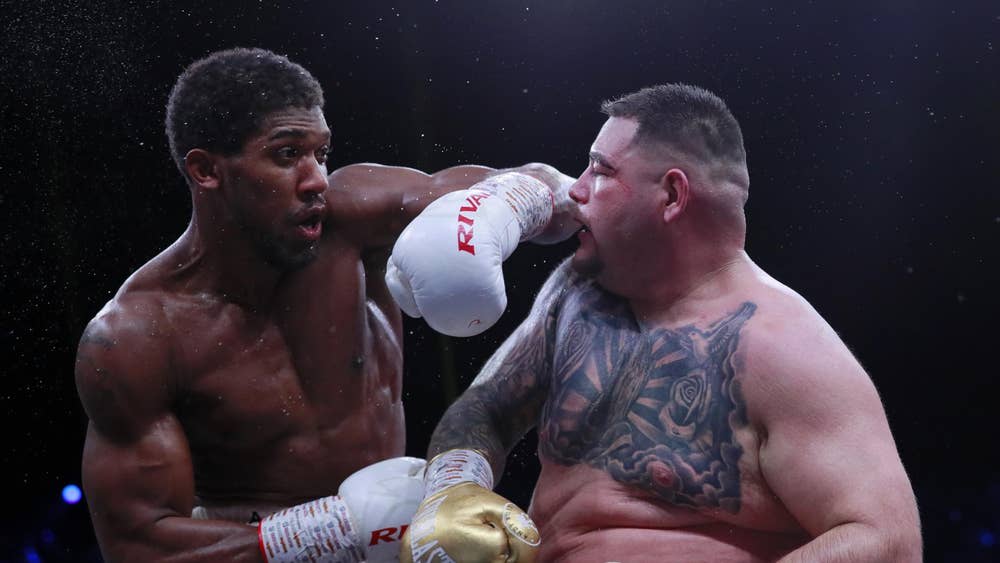 Ruiz vs Joshua 2: Will it be repeat or revenge?

The sporting world will stand still at around 9pm UK time on Saturday when Andy Ruiz Jr. and Anthony Joshua lock horns for the unified heavyweight championship of the world in their eagerly awaited rematch at the Diriyah Arena in Saudi Arabia.

This story started back on June 1 when Ruiz produced one of the biggest upsets in boxing history, beating the previously unbeaten Joshua at Maddison Square Garden in New York to win the WBA, IBF, WBO and IBO world heavy weight title. It was a result that sent shockwaves through the sporting world as Ruiz, who climbed off the canvas in the third round, knocked the Brit down four times on his way to a stunning seventh round knockout win. Both fighters are once again putting it all on the line as Joshua looks to set the record straight and right the wrongs of June 1. Will it be repeat or revenge, though, as the pair get set fore the Clash on the Dunes?

Joshua has plenty of questions to answer if he is going to win his titles back in Saudi Arabia, but despite the question marks surrounding the 30-year-old following the first defeat of his career, he is still a heavy favourite at 4/9 for victory with Space Casino. He’s not as resounding a favourite as the 1/33 that was on offer for him to win the first fight, while we won’t be seeing the 14/1 that was on offer for a Ruiz victory in New York on this occasion. However, Space Casino are off 2/1 that we see Ruiz walk out with the titles in a repeat of the result on June 1. Could there be controversy? The draw is available at 25/1, while 13/5 is available on the fight going the full distance this time around. However, if you think either fighter won’t hear the final bet, Space Casino are offering 1/4 on the fight not going the full 12 rounds.

Selected other markets… Get all the big fight odd for Ruiz Jr. vs Joshua 2 here!

What the fighters said…

Ruiz: AJ’s style perfect for me

“I know AJ’s going to come stronger and more focused, but inside the gym, like Mike Tyson says, everyone has a plan until they get hit. I’m sure everybody was trying to look for an excuse and reason why he didn’t perform and why he lost. I think it was down to the style. Styles make fights and I’ve been calling AJ out for a while. I knew his style was perfect for me and that’s why I plan to do the same thing.” “It might be a little harder than the first time. I've got to show my skills, my talent. We’ve got to see where he’s at, because all the pressure is on him. The pressure isn’t on me because I followed my dream, made my dreams come true. I’ve still got a lot to accomplish. This journey now is what I’ve been dreaming about all my life. I accomplished my dreams on 1 June and I’ve still got a lot to prove on 7 December. It feels good. You know I made history in New York and I’ll make history again in Saudi Arabia.

Joshua: I’m better than that “It’s more myself

I have to change. I am looking at myself in the mirror and saying I know I’m better than that. Andy is still the same person. He will come game and I’ve got to change some of my bits and bobs. I was 50% of the way towards getting a win, just got caught. “There is fire in the belly. There are things I have had to do to take me to the next level. I am confident I can be victorious and when I am I will tell everyone of how I went wrong. I am a challenger. This is my chance at the heavyweight championship of the world.”

Predictions from Fury and Wilder

WBC heavyweight champions Deontay Wilder to Sky Sports: “I really believe Andy’s gonna go in there and do it again. When I look at the first fight and I see certain things as a fighter, a lot of red flags that alert me. And if that same mindset and momentum goes into the second fight, Andy Ruiz is going to win that easily. I’d prefer him to win because we’re in the same stable. When he wins we have the opportunity to unify the division. If Joshua wins, I don’t think that’s gonna be.”

Former undisputed world heavyweight champion Tyson Fury to The True Geordie Podcast: “Andy Ruiz is a little fat pig, comes in on three weeks’ notice, murdered every donut and taco in California and then goes in with a man who’s had a 12-week training camp with every sports scientist in the United Kingdom. But the little fat fella goes in there and bowls him over in seven rounds… I see it going pretty much similar to the first fight.”

Former WBO world heavy weight champions Joseph Parker, who has fought bith Ruiz Jr. and Joshua, to Boxing Social: “I don’t know. I still think it’s a 50/50 fight. It’s gonna be a very close fight. Either Ruiz pushes the fight faster and goes forward because he’s taken his best shots. Or Joshua – you see he’s trimmed down a lot – he boxes him from the outside and keeps him at bay. I think if he [Joshua] boxes from the outside and uses his advantages. His reach, he used that very well against me, but I don’t have the same style as Ruiz, it’s a hard one for me to call.”

Former WBA world heavyweight champion David Haye to The Daily Mirror: “I’m split regarding this fight. It will either end in a knockout or on points and if it goes to points it means Ruiz wasn’t able to do what he does best and throw clusters of punches and work the body - and that Joshua will have kept him at bay with his jab and won enough of the rounds. But if there is a knockout, I believe it will come from Ruiz. If Joshua stands there throwing combinations with someone who bases his whole style on trading punches and turns it into a slugfest, I believe Ruiz will do something similar to the first fight. If he [Joshua] forces Ruiz to take more risks it will open the opportunity for him to land a massive counterpunch when Ruiz is tiring. That’s the only way I can see Joshua knocking out Ruiz.”

The verdict:AJ won’t make the same mistakes in Saudi Arabia

The manner of Ruiz’s win in New York will have plenty of people siding with the Mexican-American once again. He picked apart Joshua with ease after overcoming his early set-back in round three and many won’t be able to look past when trying to predict the outcome of Saturday night’s titanic tussle.

However, what unfolded in round three gives us cause for optimism that Joshua can make sure the belts head back to Great Britain.

Everything was going according to plan for the Brit when he stunned, and knocked down, Ruiz with a powerful left hook. But in trying to finish the fight, Joshua was caught by Ruiz and sent to the canvas for the first time since his bout with Wladamir Klitschko at Wembely.

It was an error that proved costly as Joshua never recovered. He was subsequently dismantled by his opponent before the fight was waved off in the seventh round, but he will not make the same mistake again.

On this occasion, expect Joshua to keep his distance from Ruiz in much the same way the Brit did in securing a points win against Joseph Parker. That win back in 2018 wasn’t the most exciting performance of Joshua’s career but it was calculated and composed, and it got the job done.

Many of the reports from Saudi Arabia suggest Joshua will come into this fight leaner and lighter than the first fight in June. This also points to Joshua putting the emphasis on movement, like he did against Parker in Cardiff, and it guides us in the direction of the Olympic Gold medallist winning by Decision or Technical Decision at 7/2.

‘Skills pay the bills’ is a phrase often used in boxing and Joshua has proved in during his successful amateur career and his 23 professional bouts so far, that he is a brilliant technical boxer. A difficult night in New York doesn’t change that and if he can jab well, get his boxing going and stay out of range of Ruiz’s quick hands, he could make it an easy night’s work.

Verdict: Anthony Joshua to win by Decision or Technical Decision – 7/2